Elise Sereni Patkotak was born many, many years ago into a much kinder and gentler world.  Her initial view of life was bounded by the Italian immigrant neighborhood in Atlantic City, New Jersey, in which she was raised and the nuns who taught her throughout her early years.  She is now a recovering Catholic.

Elise lived in Barrow, Alaska for 28 years, during which time she aged with astounding rapidity.  While living in Barrow she was a nurse, health director, social worker, columnist, radio show host, public information officer, city recreation director and Guardian Ad Litem (GAL), working with troubled kids in the Barrow Court System. She now lives in Anchorage with four parrots, a cockatoo and two very nervous little dogs (Breed: rescue) that think the birds are plotting to get all their stuff.

She is a columnist with the Anchorage Daily News and is the author of Parallel Logic, the story of her years in Barrow, and Coming Into the City, the story of her re-entry into a world with streetlights and sidewalks.

Elise continues to work as a Court Visitor with the Barrow Court System and also volunteers with a wild bird rehab center (Bird TLC) in Anchorage. She shows Kodi, a northwestern crow that is part of Bird TLC’s education program. She is a member of Alaska Professional Communicators and has been both its president and membership chair. She is also a past co-chair of the Alaska Public Broadcasting Commission and a past member of the board of Alaska Public Media.

Patkotak belongs to a wide variety of animal welfare organizations and truly believes that the world will be judged by how it treats its most helpless inhabitants, including its elderly, its young and its animals. 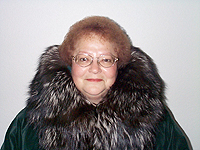 She spent her youth wantonly wasting her money on travel to exotic locations with her sister Judy before those places decided to start killing travelers for sport.  She has visited every continent in the world except Antarctica. After living in Alaska she felt that was redundant.

Her primary goal in life now is to live long enough to spend all she has saved for her old age. Thanks to recent economic trends, this may turn out to be much easier than she initially believed possible.