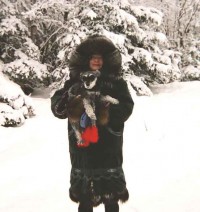 My first dog, Lovey, is somewhat of a legend in certain circles in Barrow. Not only did she live about ten years longer than predicted based on her extensive girth, but she managed to do so with uncommon grace…. and I don’t mean that in the good sense of the words.

Lovey was not particularly enamored of the cold.  She felt it was best experienced from the inside of a heated house or car.  Actually going out into it was something reserved for those moments when you absolutely could no longer keep your legs crossed for even a second.

In one marathon stint during a particularly cold spell in Barrow, Lovey went almost twenty four hours before I literally forced her out of the door. She stared balefully at me, squatted at the top of the ramp that led into my house, relieved herself of what seemed like about two gallons of fluid and then came back in with a glint of evil revenge in her eyes.  For the rest of the winter, my guests had to hop over a large yellow spot of ice to gain entry to my home.

My current dog also came from the North Slope.  Born in one of the villages, Mr. T came to Barrow when he was two years old. Although he is by birth a pure bred miniature schnauzer, he is by choice an Arctic dog.  He never thought he was smaller than the mutts that are more common in most Alaska villages and he knew he was tougher.

He has always loved to walk, something Lovey found particularly distasteful. Lovey saw no reason to put paw to ground so long as I could afford gas for the car.  Mr. T sees no need for a car so long as the temperature outside is anywhere above 30 below.  And so Mr. T forced me to walk in weather I would have normally encountered only while running from my car to my house.

When we first started taking these walks, I bought him sweaters and booties.  Apparently he did not view himself as a dog that needed these things. While I thought he looked darling in his little outfits, he would spin madly in the middle of the living room trying to shake them off. He’d growl at them. Tug at them. And eventually, through dint of sheer determination, he’d rip them to shreds.

As Mr. T aged, he grew somewhat more accepting of the coats but he has never been willing to have the booties on. If I manage to get them on him – and believe me, that is not an easy thing to do since he usually has the first one off before I’ve managed to wrestle him down and get the second one on – he will plop his butt on the floor, lift one booted foot after the other in the air and bark and shake until I take them off. If you didn’t know better, you’d swear I’d put red-hot boots on his paws that were torturing him.

When this recent cold snap hit, he came alive in a way I no longer thought possible now that he’s sixteen. He always loves his daily walk but the minute it hit below zero, his ears perked up, his body shed years and he pranced out of the house joyfully as if we’d finally found winter again in Anchorage.

Although I wasn’t prancing quite as much as he was, I must admit it brought tears of nostalgia to my eyes.  Who would have thought that Anchorage actually could produce a real Alaskan winter?  Ok, maybe not as real at the 59 below that they recorded in Barrow recently – and you don’t even want to know how homesick that made me – but more real than anything I’ve experienced in Anchorage since I arrived six years ago.

Mr. T and I both want to send our thanks to the gods of winter who brought Alaska back to Anchorage this year.  Because really, if we wanted crappy winters, we would just move to Seattle.