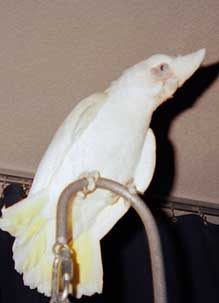 I brought one of my parrots, Captain, to the vet along with his cagemate, a bare eyed cockatoo named CB, for their quarterly mani/pedi. Both have beaks issues that need addressing with a Dremel and while we’re there, I figure they might as well get a pedi too. As the vet examined Captain, he commented on the wound on Captain’s head. “What wound?” asked his obviously caring and keen eyed mom. “Why the one where a piece of his scalp is missing” sais the (used to be my favorite until he discovered my short comings) vet.  And there it was for all to see. At some point Captain must have irritated the hell out of CB and CB finally expressed herself in the only way the male in her cage would understand. She took a chunk out of his head. I even think I know when the fight happened. I was watching TV when a horrible screeching arose from my downstairs bird room. Being the conscientious mom that I am, I yelled at them to stop it. They didn’t. I gave them a few more seconds and then charged down the stairs. As always happens when they hear me coming, whichever birds were doing the screaming and fighting separated immediately. I walked into the bird room and seven birds stared innocently at me as though none of them could have possibly been the source of sounds one usually only thinks of as emanating from hell.

So now I know the rest of the story. And the (used to be my favorite until he discovered my short comings) vet knows that I am perhaps not the perfect mother, what with not noticing a chunk out of Captain’s skull and all.

I just want to say, in my defense, I do try. But there are seven of them and one of me, so they usually are way ahead of me in any given situation.