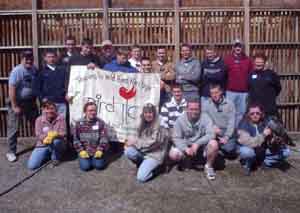 Bird TLC is pretty much an all volunteer organization.  This means not having staff to do some routine stuff that should probably occur on a yearly basis. That would include cleaning out the mew yard next to the building.  In my six years as a volunteer there, I have watched as each winter faded away and the yard went from a slightly ugly snowy wonderland to summer in Calcutta ….and not the upscale section of that town.

So it was with some excitement that I heard about plans to finally take rake to ground and try to make the place a little less scary.

That news was quickly followed by the realization that as a volunteer organization these clean up plans might just impact my weekends.  I went out to look at the yard with a more jaundiced eye after that and saw that without the help of some army of strong and willing young people, us old folks were going to be facing quite an uphill task. And that task could take all summer to accomplish assuming we didn’t start falling to the wayside as our chiropractors and Rolfers raked in big bucks fixing up what we were destroying when we tried to lift rocks and sod and wood and branches and items unrecognizable that all needed to be tossed.

So my thoughts inevitably turned to the Church of the Latter Day Saints – the Mormons. Of the many groups that lay claim to helping their communities and encouraging the volunteer spirit, the Mormons simply rise head and shoulders above all others.  Not only do they get the work done when they’ve made a commitment, but they take the definition of community very broadly and seriously.  You don’t have to be a Mormon organization to benefit from their help. You don’t have to even be a religious organization.  You just have to be a community organization that needs a hand. And they have some of the best helping hands in town.

I wasn’t surprised when I heard from Dave Dorsey, our lead volunteer on this project, that his call to the Mormon Church had scored us a group of Elders to help.  Elders in the Mormon Church are, for some reason, young people. They came in two shifts, one in the morning and one in the afternoon. They tackled the yard as though it was their divine mission in life to make it a part of God’s beautiful earth again and not the slightly seedy back lot it had become.

I’d seen young Mormon Elders do this before. When the Mormon Church arrived in Barrow in the eighties, they quickly ascertained that going door to door to spread their faith was not something that would be well tolerated. So their young people came up and became free summer labor for the community. They did everything from cleaning yards to laying down a new floor in Piuuragvik, the city recreation center.  The only time they proselytized in the traditional manner was if they were asked into someone’s home who wanted to hear more.  Other than that, the only way they spread the word about their church was by just being kind, polite young people who pitched in to help our community be a better place.

I’ve watched Mormon families take on some of the hardest cases on my GAL caseload and never give up on the kids.  At a time when other foster parents would have, rightfully perhaps, thrown up their hands and given the kids back, these families seemed to dig a little deeper into some well of strength and hang in longer than anyone would ever expect.

I’m the first to admit I don’t know much about the Mormon Church except for what’s out there in newspapers and magazines.  I know that at some point in their history they believed in polygamy and that it is still practiced by some of their adherents. I know they believe in an angel called, I think, Moroni and in books written by a prophet of the 19th century. I know that many mainstream Christian churches consider them a fringe sect at best and barely real Christians at worst.

And I know that when I need a hand that is offered with no strings at the other end, when I need people who really believe in the spirit of community, when I need strong, willing backs to muck out ten years of bird poo in a mew, I go to the Mormons and am never disappointed.

And while I’m at it, a big thanks also goes out to Alaska Industrial Hardware (AIH), Home Depot (Northway Mall), OB McCreay, and Lenny (the electrician) Landis, all of whom helped make our yard safer and cleaner for the birds and their volunteers.