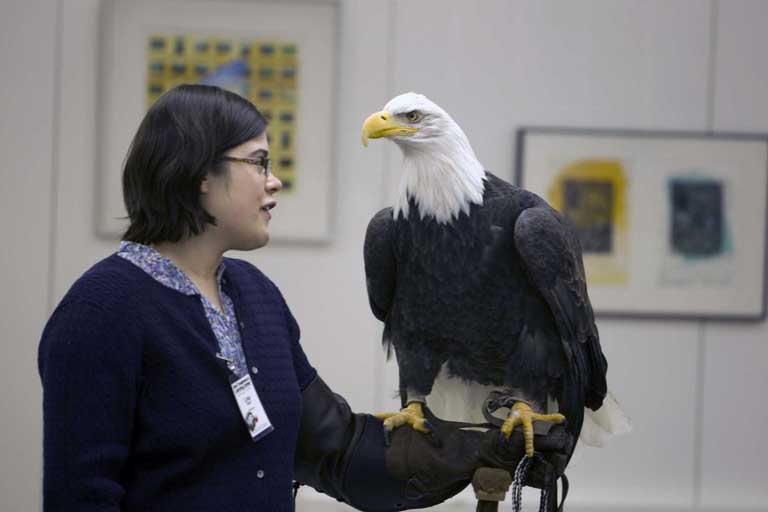 The guy who brought him in said he’d done this once before with a bird that had inadvertently hitchhiked to Alaska on a boat. He knew from experience that if he just got the bird to Bird TLC, we could take it from there. So he put the scoter in our arms and left, secure in the knowledge that there was a place in Anchorage for this bird to rest up after the watery journey. The scoter ultimately went to the Sealife Center (thanks, Uncle Ted) where the accommodations are much more to his liking. But without a first stop at TLC, there is every chance he wouldn’t have made it to the Sealife Center.

Bird TLC is an organization that respects nature and is very aware that the circle of life often involves one species preying on another for its survival. It does not shrink from this reality. It knows that predators like Merlins and hawks eat birds like Red Polls and finches. The volunteers know that magpies and even Stellar Jays will take full advantage of a weak or injured bird and have it for dinner if possible. They know this and respect that this is what nature requires for survival.

On the other hand, sometimes these noble creatures can be pretty dumb as they go about the business of survival and need our help to overcome their momentary stupidity. For instance, an eagle recently came to TLC after spending one day too many feasting in a turkey pen. Simply put – salmon, good; overdose of turkey complete with feathers, bad. The smell of what came out of her crop after “cooking” in there for a few days brought tears to your eyes even if you were three rooms away.

So despite the fact that almost everyone who volunteers at Bird TLC is well aware of the inherent dignity of the birds they tend, we are also continually faced with the fact that birds can sometimes be foolish in their choices.

A few months ago, there were pictures in the paper of some Fairbanks ravens circling a utility pole where a couple of other ravens had accidentally become crispy critters. The nice interpretation of those pictures was that the other ravens were saying a sad good-by. My interpretation of that event was that the circling birds were mothers with children and the mothers were saying, “See. What did I tell you would happen if you sat on that darn pole? Do you believe me now?”

Doing what you can for some hurt or lost creature is one way of sending out a ripple of caring across the big pond that is our world. So come to our For the Birds auction at the Sheraton Hotel this Saturday night, March 20, and help us keep our doors open to our feathered friends in need while getting to meet some of our wonderful education birds.

Hand Kodi, the Cache Crow, some bills – preferable large ones – and watch him deposit them in his jar, asking only for a mealworm in return. He works almost as cheaply as the volunteers

Have an up close encounter with Denali, our Golden Eagle whose beauty will take your breath away. Whether large or small, our education birds will be there to give you a chance to get to know some of Alaska’s most intriguing wildlife on a very personal level.

It is honestly a more fun evening than videos, games, TV or the movies. And we promise not to let any of the birds poop on you as long as you remember volunteer rule Number 1. Don’t stand behind the birds.