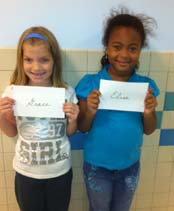 In a world far, far, far away from today, two girls became best friends as they clung together through 12 years of Catholic school and growing up as nerds. One of those girls became a teacher. Now, after teaching for almost 40 years, she finally has a class in which she has two girls who have the same names as those little girls from so long ago.

Meet Grace and Elise, 2010. Trust me when I tell you that they are way more cool than the originals ever were.