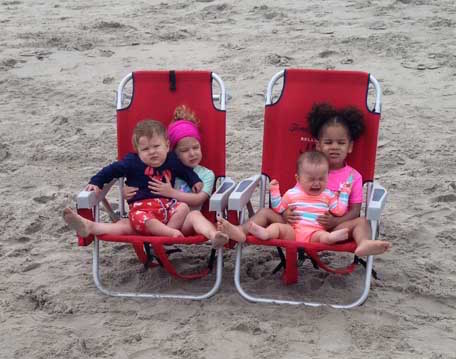 If you want to know what you look like to friends and relatives when explaining that twenty below weather is not bad because it’s a dry cold, then pay close attention to their faces as they explain to you that eighty plus degrees with three thousand percent humidity is good for your skin. No one is buying the other one’s story.

This thought occurs to me as I return from a trip to the East Coast to visit family. My mother swore that my sister and I came from the same father and that we are both her natural children. And lord knows we look enough alike for that to be possible. On the other hand, my sister thinks that heat and humidity are good things and is loathe to turn on the air conditioner until the ambient temperature in the house hits over 85 degrees. Anything less than that and she honestly believes that opening windows and turning on fans is more than enough to allow you to breathe comfortably. The fact that those fans are swirling hot and humid air does not register with her.

I, on the other hand, am an Alaskan. I spent the first twenty-eight years of my residency in this beautiful state in the Arctic. I loved it. I glowed when it went below zero. I rejoiced when it went to twenty below. I got absolutely giddy at thirty below. So, to put it mildly, I do not understand the attractions of either heat or humidity. I live in Alaska to get a snow burn, not a suntan.

Having gotten that off my chest let me say that the visit with family was wonderful in many ways. At a time when the Supremes were declaring marriage a right for all consenting adults, a family whose composition would not have been possible even 75 years ago surrounded me. My cousin Joe’s daughter is married to an African-American. His son is married to an ethnic Chinese woman whose parents immigrated to America from Vietnam. And another cousin’s daughter is married to a dentist of mid-eastern origins. Our family has gone, in one generation, from as ethnically pure Italian as you can possibly be, to a blended family of all colors, shapes and sizes. Laws forbidding interracial marriages would have precluded any of these wonderful people from loving each other and producing a new generation that will grow up enriched by the variety of backgrounds mingled in their DNA.

Where once a family photo would have shown a homogenous grouping, now we have enough variety to keep family gatherings interesting and family food feasts diversified. Ok, I lied about the food diversification. Some of my generation will never stop cooking Italian. Some will only ever reluctantly go to an Asian restaurant. And some simply don’t understand why, if you have a chance to eat meatballs with crusty Italian bread, you’d ever want to do anything else.

But except for that, my family has expanded to accept any and all newcomers who are brave enough to weather a meal with us. And that’s a good thing because it means that the next generation will be so used to the rainbow hue around the dinner table that it won’t think twice about it. In the same vein, the next generation will wonder about the fuss over same sex marriage, or as they will call it, marriage. They’ll wonder because it will be so commonplace as to not even raise an eyebrow.

I watched some of this happen in Barrow over my years there. As different populations moved in and became part of our community, there was a lot of intermarriage between the Inupiat and all the others ethnicities that followed. Barrow truly is an international melting pot now, with children of multiple backgrounds living side by side with little of the rancor that comes from fear of someone who is different; because when you’re all different, you are ultimately all alike.

So while it may be a little late to wish America a happy birthday, let me indulge myself and do so anyway in honor of the melting pot it has been and hopefully always will be. Diversification in financial portfolios and life creates a stronger result than homogeneity will ever do. Hurray for the red, white, blue, black, brown, yellow and all hues in-between.