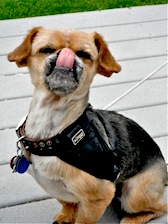 Heading upstairs last night to go to bed. Dogs following behind and in front of me except for Carm. Figured he was just slower because he’s old and on lots of pain meds and a little senile. But he has not lost that instinct that says, “This is my toy and I will protect it with all 11 pounds of my being.” So he gets to the first step and, because the stuffed animal is bigger than he is, he trips. He drops the Christmas bear. He stares at it for about a minute as though debating in his head whether he really tripped or the bear tripped him. He manages to stuff enough of the bear in his mouth to try again. He trips again. But he’s one more stair up. This continued pretty much the entire length of the staircase. Pick up bear. Climb one step. Drop bear from mouth. Take deep breaths because you can’t breathe when the bear is in your mouth. Sight the stair, calculate the height of the next step, pick up bear and make another go at it. Drop bear after achieving one more step. Repeat.

I gave up watching when he was about half way up the stairs. But not Nayla and Snowy. They watched the entire journey on the off chance there would be an opening where they could steal the bear from him.

My life is never dull.