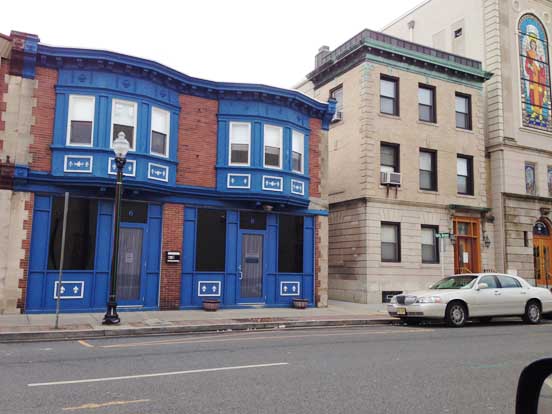 6 North Mississippi Ave. The heart of Ducktown in Atlantic City. It’s painted blue now. Dad had it painted green. Upstairs the windows on the left were our living room. The windows on the right, mom and dad’s bedroom. All of downstairs, dad’s Italian grocery store.  Walk down the block and get a sub at the White House Sub Shop, still the best in the world. But the bakery is gone. And so is Katy’s little store. And Letizia’s grocery store. And Petrillo’s Shoe Repair. And Catanese’s Swimming Pool chemicals building. But St. Mike’s is still there. And considering how

My sister Judy has a friend named Paula. They’ve been best buddies since kindergarten. Judy was in Paula’s wedding, is godmother to her daughter, and spends every Christmas out in California with Paula and her family. Despite some family cynicism, I believe Judy would spend every Christmas there even if Paula didn’t live in sunny southern California, thus allowing Judy a reprieve from the fun of a Northeast winter.

My Christmas present to Judy was a package of King Crab that she and Paula could serve on Christmas Eve. Italian tradition demands that Christmas Eve be not only meatless, but

I’m assuming that by now everyone has read or heard the story of the two juvenile bald eagles from Adak who flew too close to the fire and singed some important feathers off. They’re at Bird TLC right now. They will probably be there for a long time since the only real cure for what ails them is to have a molt occur and new feathers come in to replace the burnt ones. Thanks to the dedication of a group of clearly crazed bird people, these kids will be fed, watered and treated for their injuries for as long as

Who’d have ever thought it would be the biggest corporations in America who were most supportive of the welfare state? That’s the only conclusion I can draw as I watch the raging debate over the minimum wage.

If we follow the issue logically, here’s how it plays out. Corporate America pays its workers less than a living wage. Their workers, in turn, use the social welfare system of food stamps and AFDC to enhance their meager pay so they can feed their families. This allows those in the boardrooms of corporate America to continue to bring home millions upon millions

The stories could not have been better positioned on the front page of Sunday’s ADN to express what I think of as the yin and yang of life in Bush Alaska. The story of a tragic crash near St. Mary’s and the subsequent heroic efforts of village people to reach the crash and help the survivors, juxtaposed against the story of bootleggers and bootlegging in my old hometown. There you have in, in stark black and white, life in Alaska’s villages.

Living in a small Alaskan village is a window into both the best and the worse of human nature.

Some years when Thanksgiving rolls around, I find myself at a loss for something new to be grateful for. Until this year I considered the continued health and good fortune that generally blesses my extended family and friends a given. But the past twelve months have changed my outlook. This year taught me just how fragile existence can be.

It started early in the year when my cousin found he had a significant aneurysm and valve problem that would require open heart surgery. This is the cousin who shared my youth and my college years, if not my college activities.

I can still vaguely remember saying, with fervent conviction, “Never trust anyone over 30”.  Based on that theory, I should have packed it in a long, long time ago. But I didn’t. Instead, I wake up each day amazed at how much of my life has passed while I am still trying to decide what I want to be when I grow up.

Do you sometimes wonder when we lost the ability to savor silence? Or is that a question asked only by those of us born before the constant cacophony that is our present day world? I’m not speaking strictly of the noise we hear with our ears. I’m speaking about the constant noise that assaults our brains through the electronics to which we are constantly attached.

This thought occurs as I get ready to take a quick trip to see my old college roommate. The trip involves a flight, as do most that start in Alaska. There was a time in

I grew up in an era when you did not say anything if someone lit up a cigarette in your house.  In fact, ashtrays were a ubiquitous part of the furnishings of just about every home I ever entered, whether the homeowners indulged or not. Smoking was a socially acceptable norm.

This all changed, not because laws were instituted that forbade smoking in public places, but because those laws followed an attitudinal change that empowered people to protest being forced to inhale the noxious fumes of someone else’s exhales. The laws we now accept as the norm that ban smoking

One of the definitions of insanity is doing the same thing over and over again and expecting a different result. Here in America, we are treated to the proof of this adage through our ongoing War on Drugs and continuing Congressional budget dramas. It is also fairly evident in our endless Cuban embargo.

This is not meant to diminish the suffering of many, many people under Castro’s regime. But it seems glaringly evident that our embargo did not diminish the Castro brand in Cuba. Fidel has retired and his brother continues to rule the country. Given this reality fifty years