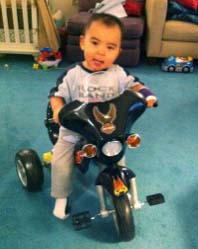 His Aaka was riding a motorcycle that was twice as big as she was and weighed about 5 times more when she was just a teenager. Her boyfriend had to kick it into first gear for her to get started. We all knew to jump off the road when she was coming down the street.

I think her grandson has decided that he wants to get a head start on Aaka by riding his first one before he’s two.